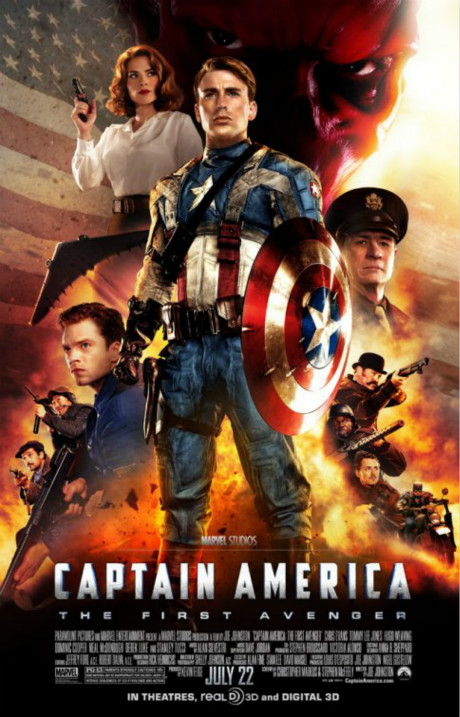 Steve：Got the jitters I guess.

Steve：Can I ask you a question?

Doctor Abraham：I suppose that is the one question that matters. This is from Augsburg. My City. So many people forget that the first country the Nazi's invaded was their own.

You know after the last war they, my peoples struggled, they..They.. They felt weak, they felt.....slow, then Hitler comes along. With the marching and the big show, and the flags and ...And he, hears of me. My work, and he finds me. Then he says, you. He says, you will make us strong.

I am not interested. So he sends the head of Hydra. East research division. A brilliant Scientist by the name of, Johann Schmidt. Now Schmidt is a member of the inner circle. And he's ambitious. Even Hitler shares his passion for, occult power and tatanic myth.

Hitler uses his fantasies to inspire his followers. But for Schmidt it is not fantasy. For him, it is real.

He has become convinced that there is a great power. Hidden in the earth. Left here by the gods. Waiting to be seized by superior men.

So when he has found my formula and what it can do. He cannot resist. Schmidt wants to become that superior man.

Steve：Did it make him stronger?

Doctor Abraham：Yeah. But, it has other effects. The serum wasn't ready. But more important.

The serum amplifies everything that is inside, so.. Good becomes great. Bad becomes worse. This is why you were chosen. Because a strong man who has known power all his life. They lose respect for that power. But a weak man. Who values of strength. And loves. Compassion.

Doctor Abraham：Give this. Whatever happens tomorrow, you must promise me one thing. That you must stay who you are. Not a perfect soldier. But...A good man.

Doctor Abraham：No, wait, wait. What am I doing? No, you have procedure tomorrow. No fluids.

Steve：All right, we'll drink it after.

Doctor Abraham：No, I don't have procedure tomorrow. I can't after, I can now.