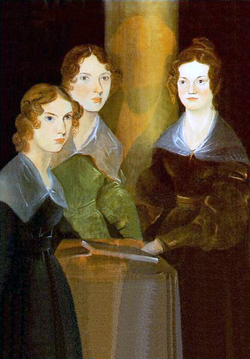 The Brontës /ˈbrɒntiz/were a nineteenth-century literary family associated with the village of Haworth in the West Riding of Yorkshire, England. The sisters, Charlotte (born 21 April 1816), Emily (born 30 July 1818), and Anne (born 17 January 1820), are well known as poets and novelists. They originally published their poems and novels under masculine pseudonyms, following the custom of the times practised by female writers. Their stories immediately attracted attention, although not always the best, for their passion and originality. Charlotte's Jane Eyre was the first to know success, while Emily's Wuthering Heights, Anne's The Tenant of Wildfell Hall and other works were later to be accepted as masterpieces of literature.

The three sisters and their brother, Branwell, were very close and during childhood developed their imaginations through the collaborative writing of increasingly complex stories. The effect of the deaths of first their mother, and then of their two older sisters marked them profoundly and influenced their writing.

Their fame was due as much to their own tragic destinies as to their precociousness. Since their early deaths they were subject of a following that did not cease to grow. Their home, the parsonage at Haworth in Yorkshire, now the Brontë Parsonage Museum, has become a place of pilgrimage for hundreds of thousands of visitors each year.