The graph below shows percentages of different types of household waste which were recycled in one city between 1992 and 2002.

Summarise the information by selecting and reporting the main features, and make comparisons where relevant. Write at least 150 words. 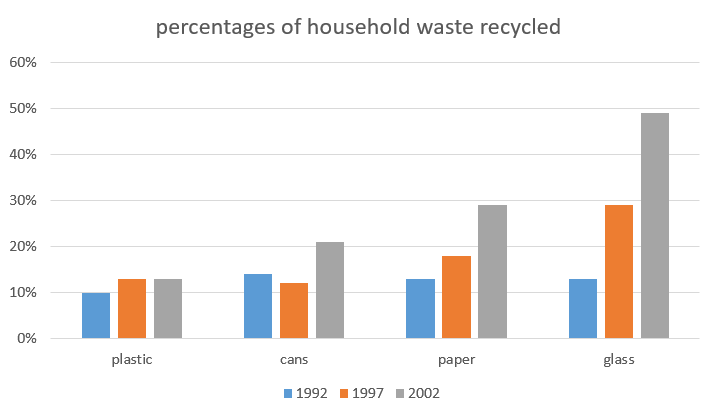 The bar chart illustrates how much household waste was recycled in a city from 1992 to 2002, and the data is presented in percentage.

In 1992, cans, as one type of the household waste, were recycled with the largest share, which amounts to 14%, followed by paper and glass (13% for each type), and then by plastic (10%). By 1997, the recycling rates of the waste materials such as plastic, paper, and glass all increased to varying degrees (13% for plastic, 18% for paper, and 29% for glass), except for the cans which slightly decreased to 12%.

After 5 years, the recycling difference among these 4 waste types became more obvious. The recycling percentage for plastic kept stable at 13%. In terms of cans, despite a marginal drop between 1992 and 1997, their recycling rates went up by almost 10% from 1997 to 2002. It should be noted that glass and paper reuse kept increasing. Nearly one half of glass waste and one third of paper waste were recycled in 2002.

To conclude, plastic waste recycling rates remained relatively steady during the decade while paper and glass were recycled at a remarkable increasing rate. The amount of waste cans being recycled showed a trend of fluctuation.

Some people say that governments should focus on reducing environmental pollution and housing problems to help people prevent illness and disease. To what extend do you agree or disagree?

Some people think government money spent on supporting artists (such as painters, musicians and poets) is better than that spent on other important things. To what extent do you agree or disagree?

Some people think governments should protect local companies when they compete with international companies. Do the advantages outweigh the disadvantages?

Some people think it is not necessary for adults to receive education in class. Self-study is a good way for them to study more effectively. To what extent do you agree or disagree with it?

Universities and colleges are now offering qualifications through distance learning from the Internet rather than teachers in the classroom. Do you think the advantages of this development outweigh the disadvantages?

Some people say that teaching the young generation foreign languages is the best way to broaden their visions about the world. To what extent do you agree or disagree?

Some people think that students in single-sex schools perform better academically. Others, however, believe that mixed schools provide children with better social skills for adult life. Discuss both these views and give your own opinion.

In some countries, many children are unhappy. What are the reasons? What can parents and schools do to solve this problem?

Some people think reading stories in books is better than watching TV or playing computer games for children. To what extend do you agree or disagree?

Some people think that introducing some new technologies can improve people's life quality in the developing countries. However, others believe that free education should be offered. Discuss both views and give your own opinion.

Anyone can use a mobile phone to answer the work call and home call at any place, or 7 days a week. Some people think this development has negative effects on both individuals and society. Do you agree or disagree?

Some people think sports games are important for society, while others believe they should more be taken as leisure activities. Discuss.

Nuclear energy is better than other energy resources in meeting ever-increasing needs of the globe. To what extent do you agree or disagree?

Some people think that using mobile phones and computers has a negative effect on young people's reading and writing skills. To what extent do you agree or disagree?

Computers enable people to be able to work at home and children to study at home. Some people believe that it is convenient and cost-saving. Do you think the phenomenon positive or negative?

Some people think that the government should ban dangerous sports, but others think that people should have the freedom to choose sports activities. Discuss both views and give your opinion.

Some people think that governments should do more to make their citizens eat a healthy diet. Others, however, believe that individuals must take responsibility for their own diet and health. Discuss both these views and give your own opinion.

The workplace nowadays is trying to employ the equal number of females and males. Do you think it is a positive or negative trend?

Some people argue that it is better to be unemployed than to be employed in jobs they do not enjoy. To what extent do you agree or disagree?

Many fathers today stay at home and take care of their children while mothers go out to work. What are the causes of this? Is this a positive or a negative development?

People are surrounded by many kinds of advertising which can influence their life. Does the positive effect of this trend outweigh negative effects?

Some people think that parents have a great influence on their children, others believe that the media is a bigger influence. Discuss both views and give your opinion.

Today, some food travels thousands of miles from farms to consumers. Some people think that it would be better to our environment and economy if people only eat local produced food. To what extent do the disadvantages outweigh the advantages?

Some people believe arts such as painting and music can not directly improve the quality of people's lives so that government money should be spent on other things. To what extent do you agree or disagree?

Many people think cheap air travel should be encouraged because it gives ordinary people freedom to travel further. However, others think this leads to Environmental problem, so air travel should be more expensive in order to discourage people from having it. Discuss both views and give your own opinion.

Air travel and telecommunication makes the communication all over the world closer. To what extent do you agree that the society benefits from international tourism and business?

Some people say that governments should spend money on measures to save languages that are used by few speakers, while others believe it's a waste of financial resources. Discuss both views and give your opinion.

Some people believe that young people who commit serious crimes should be punished in the same way as adults. To what extent do you agree or disagree?

Some people believe the best way to upgrade social security is to allow people to own weapons like guns. To what extent do you agree or disagree?

Individual greed and selfishness has been the basis of the modern society. Some people think that we must return to the older and more traditional values of respect for the family and the local community in order to create a better world to live in. To what extent do you agree or disagree?

题目：Universities and colleges are now offering qualifications through distance learning from the Internet rather than teachers in the classroom. Do you think the advantages of this development outweigh the disadvantages?

These days online education has become extremely popular, and an increasing number of universities and institutes are offering degrees by empowering people to learn from online courses rather than lectures at school. Despite the numerous advantages associated with distance learning, I think such a method cannot completely take the place of the traditional face-to-face classroom.

On the one hand, the benefits of taking courses online are obvious. First of all, the great variety of online programs and courses is a huge advantage of this type of education. Through an online learning platform such as Coursera or edX, students could choose any courses they are interested in from the world's best universities, some of which are even free of charge. In the traditional way, attending a prestigious school is so expensive that only with all those budgets can students be enrolled in. Another advantage is that distance learning helps many grownups upgrade their qualifications in their jobs with its convenience and flexibility. Even with a busy schedule, one can find some spare time to take a course or study through this way.

On the other hand, online education also has drawbacks due to the lack of two-way communication, which is thought to be effective in the process of learning. That is to say, the learner at online classes cannot directly interact with the faculty. So in case of having any questions, they may find it difficult to ask their online instructors, as communication is often very impersonal. Therefore, online learning is not that suitable for young children, teenagers, or young adolescents who may have more queries. Moreover, regular attendance in traditional classes helps children to become better disciplined, regularly scheduled, and improve their physical fitness and mental alertness.

To conclude, some groups of people do benefit from the advent of online learning. However, it does not mean it has more benefits than drawbacks or can be a replacement of the traditional way of learning; instead, it can be taken as a supplementary method.