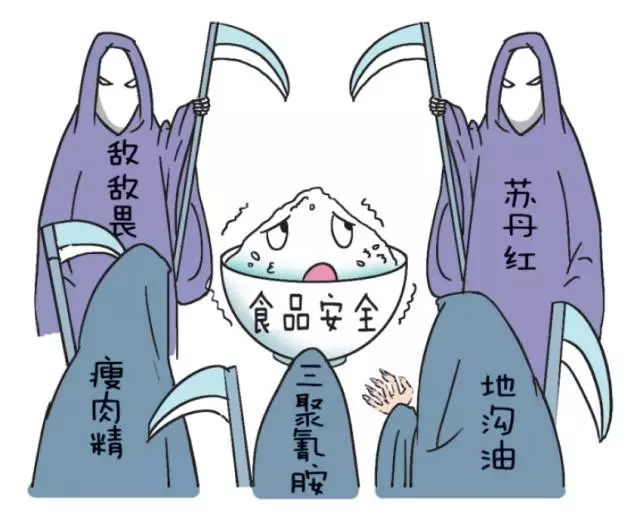 图片陈述
As is depicted in the picture, the “food safety” is being endangered by such unhealthy ingredients as dichlorvos, clenbuterol, melamine, illegal cooking oil and Sudan red,  which reminds us of some food safety incidents in our life.  All these incidents have become the focus of people’s attention.

From these incidents, we can learn that some enterprises are short of social responsibility. The causes for the absence of responsibility or even conscience may be as follows. Firstly, people’s worship of money has resulted in distorted personality and eccentric behavior. Furthermore, deficient supervision gives rise to fearless adventurers’ pursuit of huge profits.

In my opinion, there are still more things to be done. The government should take effective measures to insure the food safety as it concerns everyone’s daily life. Illegal traders should be severely punished to make them think twice before doing illegal things. And we consumers must attach importance to the things we eat and learn to protect our legal rights if cheated. Only in this way can we be able to build a more secure and harmonious society.

问答/陈述
1. What is your favorite food or meal?
I love fish and chips. I used to run to the fish and chip shop to get food for the whole family. If it was a nice summer evening, I would sit and eat them outside. I suppose that they are not so healthy, but no one seems to mind that.

2. Do you like cooking?
I like cooking and can cook several dishes well. I can cook Italian and British food. They are not very difficult to make. I cannot cook Chinese food, but I’m taking a Chinese cookery class at the Guangzhou School of Culture.

3. Who usually cooks in your home?
I live alone, so I cook for myself. My kitchen is modern, so I can cook complicated dishes. I don’t cook every day. Sometimes, I go to a restaurant near my home, especially when I’m after school. There is a Korean restaurant. It is small, but the food is great.

4. Are there any kinds of food that you do not like?
I’m a vegetarian, so I don’t eat any food that contains animal products. I just don’t like the taste of meat. I cook for myself, so I don’t worry about animal products getting into my food. However, I must be careful at restaurants.

5. Do you think that most people in your country eat healthily?
I think that Chinese food is healthier than Western food as you rarely see overweight Chinese people. Vegetables are not cooked for as long as in the West and therefore retain more of their proteins, vitamins and other nutrients. Fruit is eaten in bigger quantities and there are more varieties found.

7. What kinds of food do you think will be more popular in the future?
I think that China will follow the food trends in other countries. Certainly more foreign food will become available in shops and there will be more foreign restaurants. It is likely that organic food will increase in popularity.

8. Is food an important aspect of cultural life in China?
Yes, it is! Most Chinese people greet each other with the phrase, “Have you eaten?” So the topic of food is never far away. Families like to center around the table when they gather together. And students and workers often celebrate by having dinner in a restaurant.

10. What should we do to insure food safety?
To guarantee food safety, we need something more than the strengthening of relevant regulations. Firstly, we need to carry out a comprehensive study of food standards both in China and abroad. Secondly, we should make a breakthrough in supervision technology. Thirdly, we should guarantee the safety of raw materials, the food processing and the transportation. Only in this way can Chinese food become safer and safer.

11. What do you think of losing weight by eating less?
In my opinion, dieting is not beneficial in the long run. People tend to lose weight initially but then they regain their normal weight after some time. To lose weight, you should take correct measures. In addition, losing weight is not only losing weight but also creating a new healthy lifestyle. And you can form good habits and reduce risks of diseases. At the same time, you gain confidence when you slim down.

13. What’s your favorite snack in your hometown?
For me, the hot pot is the first choice. Watching the rolling soup in the pot, inhaling the spicy scent in the air, do not behave yourself, just take off your shirt and gobble up the yummy food. You may ask why people would take off their shirt while enjoying the hot pot, the answer is simple—the spicy hot pot makes them sweat. After a whole day of hard work, several friends gather in the hall of the hot pot restaurant. We chat and laugh while drinking the cold beer and stuffing the mouth with the delicious food.

双人互动
Topic：These years, genetically modified (GM) food has been the concern of the public. Should it be banned?

A: Genetically modified food should be banned. There is a fundamental difference between modification via selective breeding and genetic engineering techniques.

B: No, that is not true. Genetic modification is entirely natural. The process of crop cultivation by selective breeding leads to exactly the same kind of changes in DNA as modern modification techniques do.

A: No, I disagree. The former occurs over thousands of years and so the genes are changed much more gradually.  Genetic modification will supposedly deliver much but we have not had the time to assess the long-term consequences.
B: In fact, it makes no difference.

A: No, I am afraid I can’t agree with you there.  It is wrong to introduce the DNA of one species into the genes of another, such as using fish genes in tomato plants to make them frost-resistant.  It is short-sighted and unnatural.

B: It is perfectly natural and safe to introduce genes from one organism into another.  And if the government bans GM food, the choice is taken away from the consumer.

A: It is true that banning GM food would decrease consumers ’choice. However, it is right for the government to intervene and do this to prevent harm to both the population and the environment.  Besides, the number of consumers who actually want GM food is tiny anyway.

B: Have you ever considered there would be large-scale unemployment in the biotechnology industry if GM food were banned?

A: Issues of principle should always come before pragmatic concern about unemployment.  Continuing employment is not an argument for the continuation of these harmful and immoral practices, nor is it an argument in favor of GM food.

黄金必背句
1. As the saying goes, illness often finds its way in by the mouth, so people should place enough attention on food security.
正如谚语所说的，病从口入，因此食品安全应该引起人们足够的重视。

2. Food security problems do not only influence people’s health, but also destroy their confidence on consumption of necessities.
食品安全问题不仅影响人们的健康，也严重打击了他们对日常生活用品消费的信心。

3. Today citizens are becoming more and more cautious in eating and drinking for fear that they might be poisoned by toxic chemicals.
如今，人们越来越关注饮食，担心他们可能受到有毒化学物的毒害。

4. To eliminate unsafe food products, the government must work out specific laws and regulations to punish those involved with more serious fines and tougher measures.
要消除不健康食品，政府必须制定专门的法律法规，目的是用更严重的罚款和更严厉的措施来惩罚那些涉及其中的人。

5. Some unhealthy baby food on the market bring people into panic: if the little kids have got some diseases from the very beginning.
市场上一些不健康的婴儿食品使人们陷入了恐慌：孩子们是否从一开始就埋下了病根。